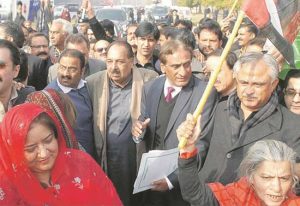 PPP is preparing for public Gathering in Kotli District of Azad Kashmir in perspective of upcoming AJK General Elections 2016. Chairman PPP Bilawal Bhutto will arrive on 30 April 2016 in Kotli to address the gathering.

PMLN Leader Commissioner Mehmood Ul Hassan was abused by a PPP worker while PPP rally was passing by him. As a result of protest Mirpur-Naar Road was Blocked by PMLN worker. Raja Riyasat and Raja Iqbal Candidates for Legislative Assembly also arrived on Spot and joined the protest.

On other side When Senior Minister AJK, Chaudry Yasin and Faryal Talpur reached at Gulpur after reviewing the preparation for public Gathering in Kotli, Nephew of Commissioner Mehmood Ul Hassan tried to overtake their protocol and disturbed the VIP movement. He was beaten by Police and PPP workers badly and his car was smashed by PPP workers.

Mean while Son of Senior Minister Chaudry Yasin was going to Kotli and was forcibly stopped by PMLN workers but he manged to escape, while two vehicles filled with ammunition were occupied by PMLN workers.

Charhoi is the constituency of Senior Minister Chaudry Yasin and PPP Leadership and central Command Members are already in Kotli for 30 April Public Gathering.

Senior Minister is trying his best to make this public Gathering successful. But Above is the tense situation of the area.