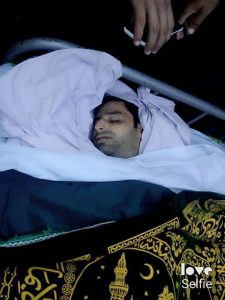 Resident of Bagh, Naeem Khan,32, got killed by robbers in Rawalpinid

32 years old Naeem Khan son of Muhammad Mehboob Khan resident of TararKhal village of Hajira in District Bag Azad Kashmir was shopping in Rawalpindi Commercial Bazar near Nadar Office along with his Aunt. Robbers tried to snatch purse of his aunt, Naeem failed their attempt and tried to capture the robber but one of them opened fire on them.

Naeem and his aunt both got injured with bullets. They were taken to Family Hospital in Rawalpindi by Rescue 1122. Naeem could not survive and died in hospital while his aunt receive injured but is out of danger.

Naeem is nephew of Sardar Wajid Raheem, Senior reporter of “Jahan Pakistan” News Paper. Naeem was working in Rawalpindi and living along with his uncle in Satellite Town Rawalpindi.

Naeem got married last year and left behind him a child and wife.

Dead body of Naeem was taken to his native home town where his funeral prayer was offered and a large number of people attended his funeral.

May Allah Grant him highest Rank in Jannah.